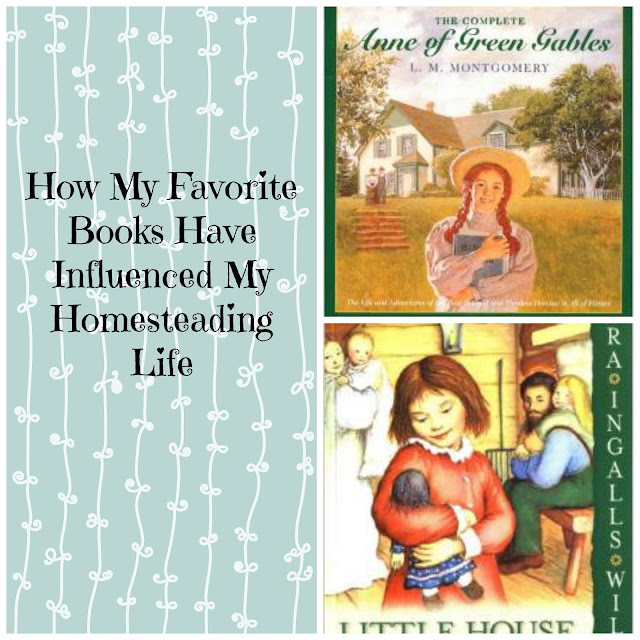 I grew up in love with the Little House on the Prairie and Anne of Green Gables books. I still love them. I still read them all the time. I love the adventures of Anne, Laura, and the people they loved and encountered. I love how they dealt with the situations they found themselves in and their daily lives.

What I took away from those books was the principles, ethics, and morals of those stories. I love how work was valued and laziness was considered an abhorrence. Even when they appeared to be relaxing, they mending or knitting in their hands. Sunday was their day of rest and they treated as such for the work they knew they had to do in the coming week.

I love how everyone was expected to help, everyone had their chores, women were in charge of their homes, and opportunities were not to be wasted. The girls were taught how to keep a house and housekeeping skills at an early age. Laura was given a chance to become a teacher and took it so Mary could stay in school and have the things she needed. Anne was given the chance to go to Queens and to college so she could support herself as a teacher. She never expected any of that, she took the opportunity, and she graduated at the top of her class.

Work could be hard, but work was never shunned. They either had the skills or learned the skills to do whatever was needed. Work was very rarely ever hired out although a hired man may be needed to keep up with the work. Sometimes Pa had to work away from home to pay the bills, but he did it knowing it was necessary. Neighbors helped each other out by lending tools, putting up the harvest, and building homes.

They all experienced hard times. Anne was very graceful about her time before she came to the Cuthberts, but life was very hard for her as an orphan and a hired girl. The Ingalls family lived a pioneer life, uprooting several times before settling down, and always starting over on the new ground. Both had babies pass away just hours/days after being born. Anne dealt with her sons serving their country by joining the army and going to war. Laura and Almanzo’s house burned down. They both reacted to difficult situations with dignity and grace, not complaining or playing victim, but by doing what they could to make the situation better.

Being frugal was a way of life. Neither of them had any choice. However, thrift and frugality were concerned a great thing. They didn’t have closets stuffed full of clothes. Often they had just 2-4 dresses. Dresses were made, made over, taken apart so the material could be used for a smaller dress, and made into quilts. Dresses were made with extra material so the hems could be let down when children grew taller. Clothes were carefully stored away so they could be used again in some way. Clothes were hand sewn for the most part. Ma was thrilled when she got a sewing machine so she could get her sewing done faster.

Many things were fixed until they could not be fixed again. Nothing was replaced unless it was worn out. Many things were hand made. Everything was carefully taken care of so it could still be nice and last longer. While general stores were available, money was carefully spent there. Shopping was not a daily thing. They took pride in making their own things and hand made items were treasured keepsakes.

Food was not wasted. Meals were simple and made from simple ingredients. For the Ingalls, Sunday meals were beans and cornbread because they could get the ingredients easily and beans could cook overnight. Holidays and birthdays were for special dishes. Anne’s Susan would make everyone their favorite dish on their birthday or when they came home from being gone for a long time. Candy was a treat reserved for special occasions. Meals and snacks were almost always eaten at home and were definitely homemade.

Vacations were never heard of until later in both of their lives. A trip to see family was very occasional. Dates were rare, but Anne and Laura went to socials, lectures, readings, and church. Courting was “going for a drive” in the horse and buggy. I love the sweetness of that! Anne and Laura were not “boy crazy”, although they knew girls who were. School, family, friends, and their duties were the focus of their lives.

Children were expected to behave and taught early on to behave. They were expected to be seen and not be heard. They were not allowed to be disruptive, rude, dishonest, or a nuisance in any way. They were given a “talking to” or firmly reminded how to behave. Often Ma would point out how the girls should be behaving and making sure they were not “loud” or “boisterous”. Marilla would tell Anne she was talking too much and to pay attention to her chores.

In my mind, life seemed simpler for them at that time. The work was harder than we could imagine and thrift was a necessity. However, they were not bombarded with technology, activities outside the home, and other things that take us away from being home and doing what needs to be ourselves. Too many people don’t take pride in caring for their homes, having a meal on the table, and being content with what they have.

I am not perfect either. My house is controlled chaos most of the time. But every time I read those books (which is often!), I remember how I want to be and what I want to strive for.

Except for wearing dresses.