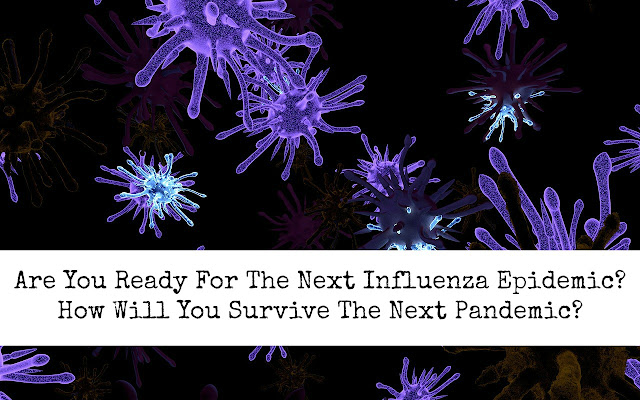 In doing some research about influenza, I came across the great Influenza Epidemic of 1918-1919. This happened during World War I and affected everyone on both sides of the ocean as well as across the world. It affected soldiers as well as citizens. It is estimated that 50 million people died during this epidemic. That is compared to the 16 million people who died during World War I.

One thing that was absent from this epidemic was antibiotics. They simply did not exist as a medicine during this time. Antibiotics in a usable form was discovered in 1928 by Sir Alexander Fleming. However, antibiotics are rarely used for any influenza viruses. We do have some medications now that will treat influenza.

It is unlikely though those antibiotics would have been effective anyway during the epidemic of 1918. The influenza epidemic came in two phases. The first phase was less severe and most people recovered from it. It came in back a few months later and killed people within hours to a few days. Most people died from the fever and fluid filling their lungs which suffocated them. The disease affected people ages 20-40 the most.

Doctors and scientists were at a loss at how to treat this influenza. They could not control or stop the disease. Remember, there was no Center for Disease Control at the time. That was not established until 1946.

1. It was not treatable. They believe the strain during this epidemic was the H1N1. Influenza strains can be mild or develop a variant that can make them deadly. Since very little was known about influenza then, it was almost impossible to treat. Today’s influenza strains are proving harder to treat. Flu shots do not cover all strains of influenza. A strain or a variant in the strain of influenza could be strong enough to not be treatable or controllable.

2. It affected strong, healthy adults the most. The age group that was affected the most was 20-40 years old. This is a group of people who are at the peak of life in terms of health and vitality. The problem with that is this is also the group of people who would be the most social group especially in 1918. Even today, people in that age range rarely stay home. The disease would be able to spread very quickly because people are constantly going. They go to work, kids’ activities, social gatherings, and college.

3. It was not controllable. This influenza strain spread very, very quickly. People were given poor advice on how to not catch the disease and how to treat the disease. We now have the Center for Disease Control who would hopefully be on top of the disease. We also now know the best way to treat the symptoms of influenza. We also know that we need rest and to stay home to keep influenza from other people.

Do you think this could happen again? Many people do. Are you ready for the next influenza epidemic? An influenza epidemic of the proportions that occurred in 1918 would be considered a pandemic now.  We hear threats of pandemics now that could happen. How would you survive the next pandemic? What do you need to do to get ready?

1. Get a sick room ready. You should have a room, preferably a bedroom, ready to be a sick room. You should have some medical supplies ready in that room like a thermometer, ibuprofen, hot water bottle, instant cold packs, face tissues, disinfectant spray cleaner, trash bags, face masks, and disposable gloves. You may also want a pandemic flu kit in that room for the people treating the sick.

2. Have white towels, washcloths, and white bedding ready to use. You want linens you can wash in very hot water or even put in boiling water to disinfect. You can also use bleach on white linens without issues. You want to have extra linens so you can change the sick beds quickly and wash the infected bodies without worry.

3. Have rolls of heavy plastic to cover surfaces like the bed, the floor, the windows, and the doorways. You have to think about disease control going in and out of the house. You are trying just as hard to keep the disease out as well as keeping it controlled in your home.

4. Keep some chem suits on hand. You may want to completely cover up to deal with a sick patient or having to go into infected areas. A chem suit with boots and gloves would be the ideal solution. You will also want a face mask and eye protection to keep safe.

6. Have a plan in place for death. In a pandemic, death is inevitable. What will you do if someone dies? As morbid as it seems, you may want to have a body bag on hand. You also want to have a plan for the disposal of the body. Where will it be buried? Will you bury the body? Those are your decisions alone, but having a plan will make those decisions easier.

7. Do not go anywhere if you don’t have to. During a pandemic, being a homebody is your best bet for not catching the disease. Having good food storage, water storage, and a disinfected home will be wise.

What will you do to protect yourself during a pandemic? Do you think we could have another influenza pandemic?