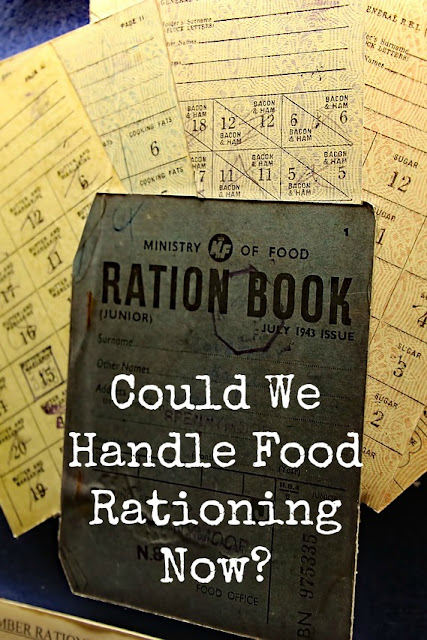 In WWI (somewhat) and WWII definitely, food rationing was one of the few ways that governments in the United States and Britain could keep the soldiers fed as well as its citizens. Everyone was expected to do their share and stay within the guidelines of food rationing. In addition to the food rationing, citizens were heavily encouraged to “do their part” in their duty to their country by growing food and making every bit count.

Could we handle food rationing now if and when it should happen again? That is hard to say. Many people would have a very difficult time with the food rationing system. Processed food is much more prevalent now than it was during the 1940s. People are not as creative with food as they could be. Cooking from scratch is becoming a lost art. People are also not nearly as patriotic as they were during the first two world wars.

People are used to having food when they want it and how they want it. People, in general, are much more impatient now. Imagine being told you can only have so much food and you have to make a choice about what food you can have. Plus, people were encouraged to eat less meat during the war and choose cheaper cuts of meat to eat. Meat is a hefty part of a lot of diets now. People would have to make some severe changes to their diet that probably would not go over well.

Obesity is also a problem in the United States and Britain now.  People are used to eating a lot of food, making not so good food choices, consuming a lot of sugar, and not moving enough to deal with the excess food. Food rationing would be a tough adjustment for those people who suffer from obesity. If you struggle with your weight, now would a good time to start making changes before they are forced upon you.

Processed food is much more accessible now than 70 plus years ago. We also have a lot of manmade ingredients that were not even available back then. Processed food and these ingredients have brought about the advent of cheaper and easier to eat food. This definitely cheapens the cost of food, but depending on why we are being rationed we may not have access to the ingredients. You might also see more processed food being rationed because of the ability to make it might be restricted.

Creative cooking and cooking from scratch is almost a lost art. While many people during those two wars were well-acquainted with cooking from scratch, now many people rely on processed foods or premade meals from the grocery store. Eating out is also at an all-time high as parents find it easier to go through the drive-through or stop at a sandwich shop to feed the family. Food rationing would be a shock to those that would have to learn how to meal plan, read recipes, and cook creatively for possibly the first time in their lives.

We have many, many more people in our population now than we did then. We have more mouths to feed and more people in the inner cities who do not have access to cooking, growing, or forging food. While poverty existed in the 1930s and 1940s, we have still had a widespread and bigger problem with poverty today. Many people struggle to eat every day and rely on soup kitchens, food pantries, shelters, and the kindness of people just to get fed. What would happen to those people and those places when food rationing happens? Would the government provide for those places and for the people who need them? Would churches and charities still be able to support them? There is no clear-cut answer to this problem.

SNAP benefits would certainly be reduced to reflect rationing as money would not be as available for this program. We would need to divert money to our country’s defense and military. While individual states control what SNAP benefits could be spent on, the benefit amount would certainly be reduced. With the advent of food rationing, I could also see the government controlling how they could be spent. Only certain foods would be covered and nothing that would seem like a “luxury” grocery item.

People are also not nearly as patriotic now as they were during those wars. The contempt for our government now is at an all-time high. Take away or reduce someone’s SNAP benefits and you could have a riot on your hands. Tell people they need to do their “duty” for whatever situation brings on food rationing and reduce their consumption of food, not have certain products available, or be restricted on what they can buy – I cannot even imagine what would happen. We have lost our loyalty and ability to stand as Americans against the world and do what is necessary to come out on top. The reaction could be violent and intense.

But mostly, we have lost our ability to be self-reliant. I love seeing homesteading, prepping, and self-sufficiency on the rise because more people are interested in stockpiling food, growing and foraging for food, raising livestock, canning and preserving their own food. Those are the things that will help you survive food rationing. Doing what you can to supplement food rationing and stretching food as far as it can go will only serve you well. Managing food waste will be critical. Being self-reliant will be the only way to survive food rationing.

So, could we handle food rationing now? I think we can, but it will be a huge adjustment and will probably have some riots happen as some groups of people do not handle well being told what to do even if the cause is great. However, we all have adjustments we need to make, skills we need to learn and maintain, and preparations to make. We need to be ready just in case because the event that brings on food rationing here will not only affect us as a country but globally as well.

Related links:
Nine Ways to Beat The Food Rationing System When It Happens Again
Ten Lessons Learned About Food From The Depression and Wartime