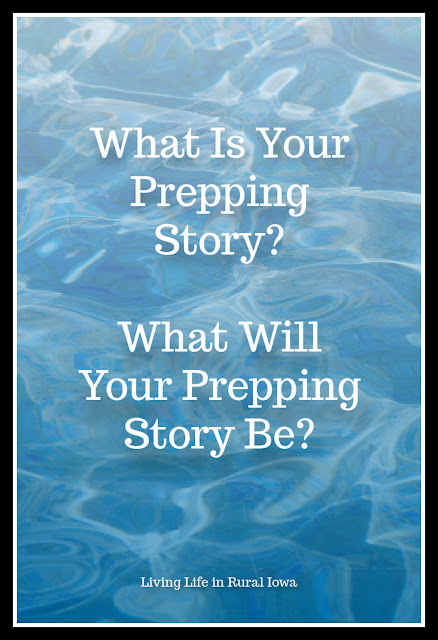 In prepping, a lot of people didn’t grow up with parents who were prepared. They may have done things we consider prepping because they wanted to save money. Our parents were raised by their parents who more than likely survived the Great Depression and WWII. Those parents were shaped by their experiences. They knew every trick in the book to save money and to fix what they could themselves. They often tried to pass that information on to their kids, but ultimately they wanted their kids to have a life where they didn’t have to worry about money.

In my non-writing job, I still deal with these people. Some of them are more frugal than I could ever dream to be. I also call them the original preppers because they never throw anything out that they could use/reuse and they know how to do almost anything skill related. That was just how they had to live.

They lived in some really tough times and without all the technology we have available now. Their stories on how they lived and what they experienced just leave me in awe.

We are now living in a time of uncertainty again. We don’t know what is coming, but we can guess. We will have our own stories to share. For most of us, our story is not anywhere near finished. Some of us are just getting started with prepping because of this pandemic and economic downturns. Some of us have been prepping for years. We all have a story to share and to continue.

For me, I got started because I became a single mother with four kids after a divorce. While I didn’t start out prepping, I started out with the idea that I wanted enough food in the house to ride out a short paycheck or a time when I couldn’t afford groceries due to bills. I didn’t trust my ex-husband because he wasn’t keeping a steady job so I wasn’t getting child support. Money was so tight that Lincoln was being stretched on a rack.

I ended up going on food assistance and Medicaid for 3-4 years while still working full-time and picking up part-time work. I was on a pretty strict budget, but there was never enough money no matter what I did to make more money. An emergency or unexpected bill would throw me off my budget for a few months. The easiest thing to do was to go on food assistance because my kids eating came before my pride. I also ended up on child care assistance too due to a lack of child support and I qualified. My daycare provider insisted that I apply since she was a state registered daycare and I’m glad I did.

While I was not very happy to be on any state assistance, I was happy to have a little wiggle room in the budget. However, the money will still tighter than tight. An emergency or unexpected bill would still throw me for a loop. Nevermind that all this happened during the 2007-2008 recession. Money was tight for a lot of people.

With food assistance, I was getting more money than I would normally spend on groceries in a month. At the same time, I was teaching myself to garden even though I was pretty much a dismal failure at it for the first few years. I also started to learn about food storage. I quickly realized I could use the extra money from food assistance to start a food stockpile and have extra food at home for the tough times. I would shop the loss leaders at the grocery store as well as shop the clearance shelves at any store. I would also use my tax refunds to buy extra food as well as extra supplies at home. I discovered I could make my own laundry detergent and cleaners really cheap. A whole new world opened up to me!

Well, a majority of the bloggers I was following for food storage tips also wrote about prepping. I realized I was doing my family a major disservice by not being prepared. I started doing more than food storage in about 2010 which was when I also went off food assistance, Medicaid, and child care assistance. I was making too much money for all of them which was pretty laughable at the time, but we survived.

About this same time, I started canning hardcore. Everything got canned that I could preserve from the garden, the store, and leftovers. I also started dehydrating fruits and vegetables. I also started being prepared for job loss, economic downturns, power outages, and natural disasters. I added laying hens to the farm for a protein source as well as the joy of raising chicks and tending hens.

As I have come along in this prepping journey now, I continue to prepare for most of the same things. I had added pandemic prepping about 3-4 years ago as well as being more prepared with medical situations. I have learned so much that I never dreamed I could learn. I am still learning. I still try to learn new skills as much as I can when I can.

In this day and age, our prepping journey still has a long way to go. Like I have said before, we are going to experience things we have only read about. We will probably get a taste of what our grandparents/great-grandparents experienced in the first half of the twentieth century.

I consider myself a home prepper. I want to be prepared as much as possible at home. While I think you should learn how to survive in all scenarios, I think home should be the first place you should focus your efforts on. I also think you should learn how to survive outside the home by learning to build shelters, start a fire, and forage for food. All these skills are important. However, I write about home preparedness (most of the time) because that is the area where I have the most experience.

I have survived a lot because of what I have done at home. I don’t consider home preparedness to be just prepping. I consider it to be frugality, prepping, homesteading, gardening, self-sufficiency, and more. However, I will write more about that later.

This is my prepping story so far. Judging by the fact that the world seems very uncertain right now and I am still in my forties, I would say my story is long from over with.

(Notice: I am an affiliate for Amazon LLC. It doesn’t cost you anything, but it certainly helps to bring a little extra income into my home. Thanks in advance for any links you use!)