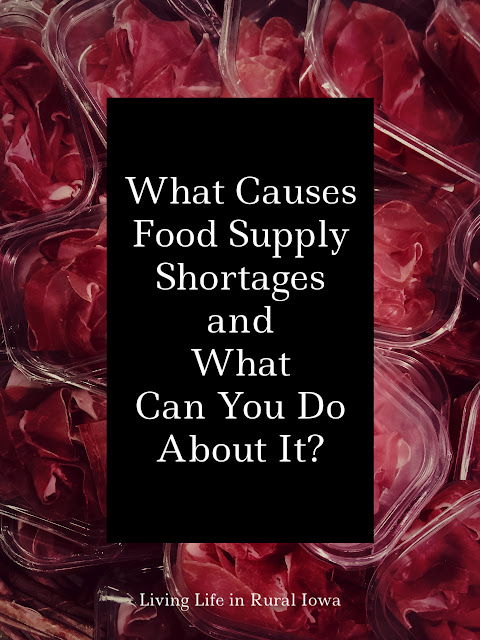 There is this idea that most of our global systems are infallible. Because we have always had food at our disposal, we don’t like to think that our food systems will collapse. However, food supply systems rely on a few factors to keep moving.

Transportation is the most important factor in keeping a food supply system going. If there is a breakdown in transportation, food supply systems will either be delivered late or not at all. That creates problems for everyone after the point of breakdown. For example, docks and customs offices on the west coast are undermanned due to the pandemic and can not process the ships fast enough. Many food ingredients, packaging materials, and other goods have sat on ships for weeks (if not months) until they could be processed due to overwhelming demand, online ordering, and workers’ shortages.

The shipping industry makes the global supply happen, so when something happens, delays happen. When a ship was stuck in the Suez Canel for six days, that ship held up a good deal of global trade for six days. Those ships (stuck and waiting) were carrying almost everything you can imagine to be delivered all over the world, including food. What would have happened if that had lasted longer?

We do grow a majority of our own food in the United States. I also would challenge you to pay attention to all the food you consume for a week or longer. Where was that food produced? If you buy fruits and vegetables, where was that food grown? Where was your food packaged? Just because your food is distributed by an American company does not mean it was grown or packaged in the US. I had bought some canned mandarin oranges last week. The canned mandarin oranges were packaged in China and said so right on the can.

Coca-Cola is a prime example of this. Diet Coke and Coke Zero were in a shortage because the artificial sweetener (sucralose and aspartame) and other ingredients were produced in China. While Splenda is made in the US, China produces a cheaper version that is often used in food products and drinks to drive down the price. China also produces 80% of the world’s aspartame and other artificial sweeteners that are used in other products globally.

Many people haD noticed a lack of availability of their favorite beverages also due to aluminum can shortage. There was not a shortage of aluminum, but aluminum cans due to demand. While aluminum cans are made in the US, most major suppliers also have operations globally that help supply the US. Those supplies couldn’t get to the United States on time because the ships were stuck in a harbor or not even allowed to dock for weeks.

While people will want to point out that there are manufacturers in the US, you also have a continuing scenario. Similar to the energy markets, sometimes companies make a bigger profit selling globally than they do nationally. We can sell oil for more money overseas and pay a lower price to be imported from an OPEC country. Most companies can make products and sell them overseas for more profit than selling them nationally. Those companies can then import items cheaper than buying them nationally.

Another significant factor in the food supply chain is labor. Labor is key for planting, maintaining, and harvesting crops. Many large corporate growers depend on cheap labor, such as migrant labor, to keep their operations going. If you don’t have the labor to take care of the crops, you can not get the crops harvested before they may be past the picking point.

Labor is also crucial in factories and distribution centers where food is produced. Many corporate factories suffer from labor shortages which causes their existing workers to work longer hours and more days to keep up with demand and meet corporate expectations.

During this current pandemic, migrant workers were either sent back to their home countries or left in the last area they worked because they could not travel. When the migrant workers were not allowed to travel, growing operations could not have their fields maintained or harvested. Both migrant and factory workers were in areas and populations that the virus spread quickly due to the close living conditions and the close proximity in which they worked and lived together. With quarantines and shutdowns, many people could not work like they were working before the pandemic. When factories shut down for even a week, many workers lost out on a week’s worth of wages and corporations lost out on a week’s worth of production.

None of this may seem like a big deal in one instance or another, but the global economy relies on migrant workers. With the millions of migrant workers who are moved from area to area, not being able to travel to certain areas to harvest crops creates another kind of shortage. While some of these migrant workers were still considered essential in the United States, other parts of the world did not consider them essential and showed extreme prejudice towards them during the pandemic.

The third and final factor in the food supply chain is weather and natural disasters. Weather patterns dictate what farmers can grow and not grow in most areas of the world. Most years, the growing season can move along with hardly a hitch in the plan. Other years, a killing freeze can destroy orchards overnight. A derecho can wipe out millions of acres of corn, oats, and soybeans. A hurricane can wipe out factories and fields alike. Wildfires can burn thousands of acres a day which can include fields about to the harvested.

All of this shows the fragility of the global food supply system. One or two things happen and the whole system can experience delays and shortages. Many people think that the system is infallible and can be compensated for in another way. That may be true, but it also indicates a bigger problem.

We have become dependent on a global system instead of a local system. We have forsaken our local systems for the ease of convenience of grocery stores and megacorporate distribution centers that start with an A. We get upset that strawberries are not available in January when seasonally they shouldn’t be available then. We get upset that our favorite soda is not available right now. We get confused because we don’t have twenty different lunchmeat choices that day at the store and you want a certain kind of roasted turkey lunchmeat.

We have gotten spoiled. Very, very spoiled. We need to start looking at our options and doing what is best for our families and us. This will mean a few things:

1. Start eating foods that are in season now. Eating seasonally used to the way of the world before you could produce from Chile in the winter. Strawberries and other like berries are summer foods. They taste best right out of the garden where they ripened fully under the sun. If you want to eat them in the winter, you need to either freeze them or preserve them in a jam. If you can’t grow them yourselves, look around. U-pick farms and farmers’ markets have a plethora of fruits and vegetables in-season looking for a home.

2. Start growing your food. Even if it is just greens and herbs inside the house, you are better off than buying pesticide-laden lettuce in the store. Even if the lettuce was grown in this country, you are still not getting it at the peak of freshness. Never mind, who knows what was sprayed on it. You should find a way to grow your own food, whether that is at home, in containers, in a community garden, or on a friend’s land. Growing your own means you know exactly where it came from and do not have to worry about a labor shortage.

3. Buy locally. You can source a lot of food locally if you do some research. Fresh meat, farmers’ markets, u-pick farms, produce stands, forging, gleaning, and your neighbor’s excess produce are all excellent ways to get more locally produced food into your home.

4. Do without. Here in the United States, we are spoiled. We have whatever we want when we want it. For a very long time, whatever you wanted to purchase was at the grocery store, ready and available. Since the beginning of the pandemic, some good things have happened. One of those things is that we have experienced food shortages that have taught us the value of growing our own food and the fragility of the food system. We have also learned that just because the demand is there for certain items does not mean that the production is there to make the item or that the grocery store has more in a warehouse somewhere. Most grocery stores only have limited supply and depend on the trucking industry to get what they need when they need it. The truckers can only bring the items after they are produced. If the item cannot be produced quick enough, shortages happen.

What does that mean for us? We need to learn to go without. Having five different kinds and brands of milk is often unheard of outside this country. Having out-of-season produce just doesn’t happen in a lot of countries throughout the world. Most of those places go without until the item is in season or reappears on the shelves.

We have seen a wonderful resurgence in people growing their own food and making food from scratch during this pandemic. The panic shopping at the beginning of the shutdowns and lockdowns helped people get more creative at home and in the kitchen. However, with the increasing fragility of the food supply chain, we need to take this a step further and do what we can to provide for ourselves.

4 thoughts on “What Causes Food Supply Shortages and What Can You Do About It?”