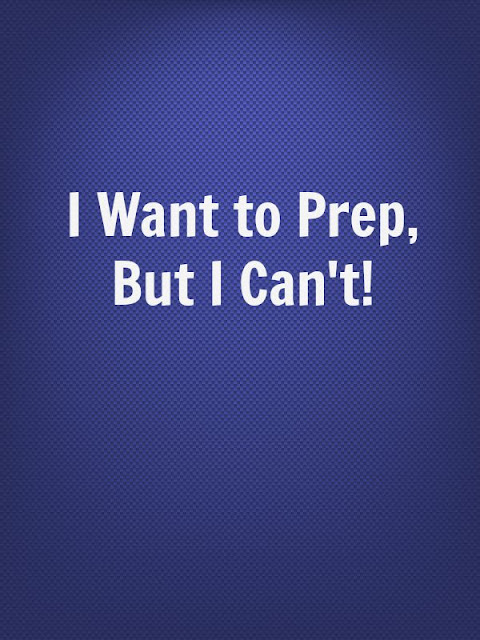 As I mentioned before, I read a lot of prepping boards and comments on posts in various social media outlets. I see a lot of people say that they can’t prep (or homestead) because of various excuses.

You know what? You don’t need anything more than ambition and gumption to prep and homestead. However, many people are scared to do so before they even get started.

The reality of prepping has been warped by reality television shows that only show half of the reality. Beginning preppers watch these shows and think that is where they need to be. They think they need to have everything these preppers do NOW and they don’t have the money for that. What many newbies don’t realize is that preppers shown on television have been building their supplies up for years.

In another scenario, they see what the top prepping bloggers have and talk about needing to be prepared. Newbie preppers become scared from the sheer amount of stuff and skills these people have. Again, they don’t realize that these bloggers, including myself, have been working on prepping for few years.

Some beginning preppers also see the money involved in some of the purchases that others make. They know they don’t have that kind of money to spend on those things. Then they worry about not having what they need. They get confused, frustrated, and simply quit because they believe they will never have what they need.

That is simply not true. Want an example? I just bought an indoor non-electrical heater today. I had not really addressed the need to stay warm if we lost power in the winter because I didn’t have the money to do so until now. What I bought is not the perfect solution either, but will see us through at least a week of no power if it needs to.

I have been prepping for a least 8-10 years and had not taken care of this yet. Why?

Having the stuff you need to prep is great, but having the skills and learning adapt with what you already have is better. I have spent more time learning to homestead, garden, canning, and acquiring other skills so I could adapt. Skills are more important than stuff. Learning to adapt and make use of what you already have will better serve you in a crisis situation than having stuff.

And guess what? Learning skills rarely cost money. All you usually need is time and motivation to learn. We all have that if what we want to learn means enough to us. Staying alive and surviving means a lot to me so I learn and practice skills. I learn to adapt to different situations so I am comfortable doing so should the need arise.

Excuses are just words to justify laziness and self-pity. We don’t need that. Learn to prep.