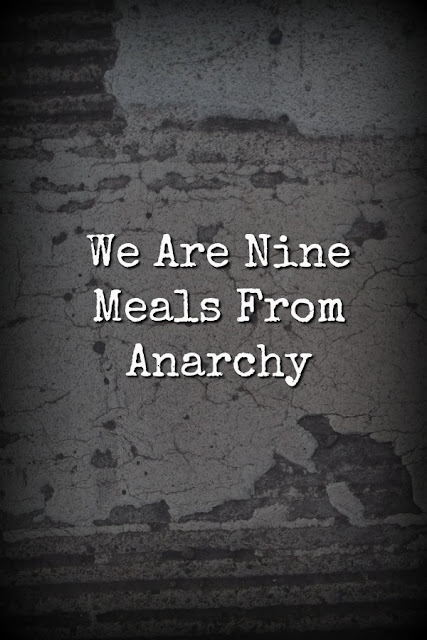 The phrase “There are only nine meals between mankind and anarchy” was stated by Alfred Henry Lewis in 1906. He was an investigative journalist, editor, and lawyer who wrote for the Chicago Times-Herald. In 1906, the supply lines for food distribution was different than today, but the sentiment is the same.

Until yesterday, I had not really thought about this phrase until I met a guy who is also a prepper and has woken up to the lies we have been fed in this country. When you meet someone who is a prepper and you have a pretty deep conversation with them, you learn new things. (Or at least I hope you do!) He brought up the fact that we are nine meals from anarchy.

In this country, grocery stores, warehouse stores, and mass-market retailers only carry enough food on the shelves for three days. They have trucks scheduled for deliveries 1-3 times a week depending on the product and the sales. They may have another two days worth of food in their warehouse or storage inside the store, but usually not any more than that.

For everyday shopping and in normal times, this is fine. People generally shop 1-2 times a week and they don’t know any better. They might be a little perturbed if the store is out of a product or if the sale items are sold out, but they know in a few days more will be coming. They know they can usually get a rain check or just come back for that item.

What happens when there is a pending disaster or a chaotic event?

What is the first thing that people do when they know a snow storm is coming or they will not be able to leave home for a few days?

They run – not walk – run to the grocery store. They load up on food and they wipe the shelves clean. They don’t want to go hungry.

Suddenly, the three-day cushion becomes less than a day. Stores have to reorder what they need to restock and the trucks need to be back on their way to the store. This can be at least a 1-3 day turnaround because the trucks deliver from warehouses. Warehouses need to reorder and restock for the outbound orders.

And if a disaster or chaotic event hits before the trucks can make it back, there is no food at the grocery store.

If there is no food at the grocery store, there are people going hungry.

If people are going hungry, there will be anarchy. People do not like to be hungry. That is just a standard, basic fact. If they are hungry or their babies are hungry, guess what? They will go to any means necessary to get the food they need to feed themselves and their families.

You don’t want to be them. The most important thing you can do for preparedness, besides increasing your knowledge and skills, is to be constantly increasing your water and food storage. You want to have at least a month’s worth of food in your home at all times.

However, now the Department of Homeland Security is recommending SIX MONTHS OF WATER, FOOD, AND SUPPLIES. Does it seem like I am yelling that? I am. When a government agency who usually has its head buried in the sand says something like that, pay attention. They know our power grid is not defendable. They know it is vulnerable. They know it needs to be updated and secured. However, hackers can get into computer systems now and shut it down. They know terrorists can send an EMP-like bomb and shut it down for great lengths of time.

Anarchy is not a good thing despite the number of people who thinks it needs to happen. It is scary for the people who live in the area, the people who need to defend their homes and food, and for anyone caught up in the chaos. It causes a lot of damage, unnecessary deaths, and more because people refused to prepare for this and decided to become criminals instead.

Many of you will say that you never would stoop to this. You would never be part of the anarchy. I will call you out on that right now. Unless you have a superior sense of morality and ethics, you will never know what you will do or are capable of until you are in this situation. You ran out of food and now your babies are hungry? Hmmm…you will try to get food the right way at first, but then what?

This is scary to think about. Most people will not take it as seriously as they should because they don’t want to think it will happen. However, look at what happens before a hurricane. Look at what happens before a major snowstorm in an area that isn’t used to snow storms. It happens in Iowa before a blizzard and people here should be used to it. They wipe the stores clean in order to have enough food at home to get by.

I realize that most people who read this article are preppers in some shape, way, and form. However, you have a duty to tell others about this. You have the ways and means to encourage others to prepare and start adding food and water storage.

I know a lot of people reading this also grows and raises their own food. Do not take comfort in that fact because if the food is not ready to eat or stored away ready to eat, you do not have that food to eat. You still need six months of food and water stored in your home, ready to eat. Yes, you can still grow food and butcher meat, but have you thought about how to do that with no power?

Recommended reading:
Nine Meals From Anarchy by Doug Casey’s Internation Man
DHS Says Americans Need to Start Prepping For Up to Six Months Without Electricity!
Surviving a Catastrophic Power Outage: Strengthing the Capabilities of the Nation

One thought on “We Are Nine Meals From Anarchy”