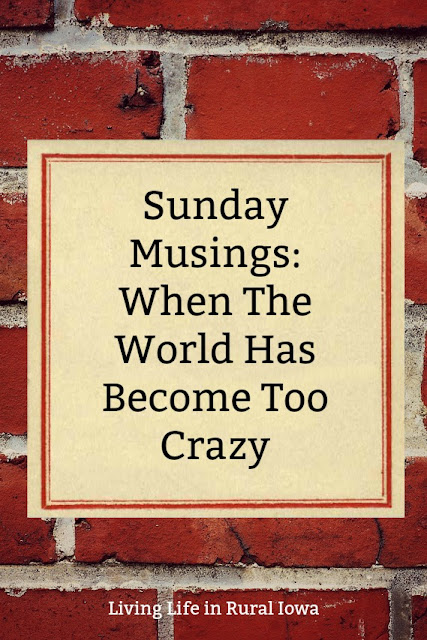 (Sunday musings are my opinions and point of views of things going on in my head, my heart, and in the world. Right or wrong, they are how I feel. I hope to keep this up every week, but this is the first in the series.)

Interesting title, eh? I am feeling that right now.

This world is an interesting place right now. There is so much going on politically, socially, and economically that we don’t even know where to focus on. Nevermind the weird weather patterns and “strange” events going on throughout the country with earthquakes, heavy snow, heat waves, and exceptional amounts of rain. I think they are attributing this to a solar minimum, but the theories abound.

I usually encourage people to be prepared for things that would naturally occur in their area as well as anything that could impact their lives. However, I am thinking we should take prepping another step further now. Why?

The world is a crazy place right now. Being a student of history, every generation and decade of the past has said this in one way or another. Things have happened in the 20th and 21st century that can only be described as mind-blowing. Things continue to happen every day that make me want to scratch my head and disappear at the same time. Politically, this country is a mess. Economically, the world is a fragile place. Mentally, we have a generation coming that will either save us or doom us.

I just read this morning that “The twentieth century has been an era in which limitations were dissolved.” (A Plain Life by Scott Savage). That has been more than true in a lot of respects. Homelife has changed dramatically. Women work outside the home now out of necessity and not choice for a lot of families. As a country, we have made more strides in technology and manufacturing than ever thought possible in any other period of history. Social media and mass media has made reaching people faster than ever with “news”. It is incredible what has happened in the last hundred plus years.

I could keep going on, but truthfully, this preparedness blogger is at a loss at what to write about. I have ideas galore and will keep writing. However, I think it is time for a revolution in thought, lifestyle, and beliefs. We have lost our sense of community. We rely on computers and social media way too much for the personal connections we desire. We have lost skills and independence. We have forces around us that desire us to remain dependent upon governments. They want to bury us in rules, permissions, licenses, registrations, and taxes. They want to control us.

We have ways to fight back. A good deal of us are already fighting back. By being preppers, homesteaders, back to landers, and whatever title you like to give yourself, you are taking steps to be independent. Every day you can make the decision to be more independent. We work to be more thoughtful about what you consume, what you produce, how you spend your time, how you raise your children, how you treat your significant other, how you treat others, and what you choose to do every day.

Being a better person will make you a better prepper. I want us all to be better people and look out for others. This isn’t an SHTF thing or a TEOTWAWKI thing. Those things could happen. We are probably in a slow roll to one of them right now. However, if you are kind to people and observe the golden rule, people remember that. I experience it every day with my customers at work and the relationships I have built in my life. Even online, you can be kind instead of tearing down the person (who you might even really know) who disagrees with you or belittles you in some way.

Does this mean you shouldn’t be disgusted by local, national, and world events? Absolutely not. Like I said before, there are some crazy people out there who got some power and now are doing crazy things. It is a crazy world we live in. We need to speak out what isn’t fair or right. That is our duty as citizens. That is the thought that started our country in the first place. We didn’t like how we were being treated by the British government. We spoke out and we started a revolution as a country.

Living a life that is independent takes some work and doing. However, you need to do this for yourself and your loved ones. We need to teach the younger generations this too. The only way to fight against the craziness is to become as independent at possible. Being preppers, we have already taken steps to do that. We just need to take it a step further and I hope to help with that as much as I can.

2 thoughts on “Sunday Musings: When The World Has Become Too Crazy”